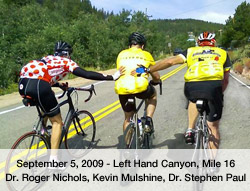 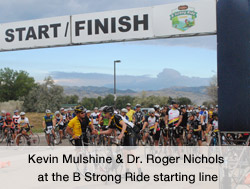 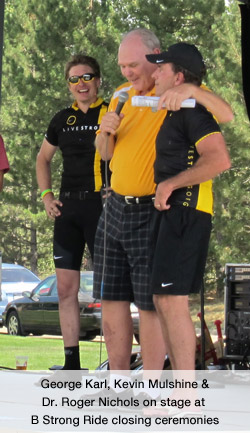 B Strong Ride was founded by Boulder cancer survivor Kevin Mulshine and Dr. Roger Nichols – one of the doctors that saved Kevin’s life.

In the throes of Kevin’s cancer battle, some of his doctors (who were cyclists themselves) gave him a cycling jersey and all signed it. They vowed to get him back on a bike and lead him on a ride to Ward, Colorado – more than 9,000 feet above sea level.

At the time, the plan seemed impossible. But with the help and support of his doctors, family and friends, Kevin battled the disease into remission.

On September 5, 2009, Kevin pulled on that jersey and met his friends and doctors that saved his life at the bottom of Left Hand Canyon for the 34-mile ride to Ward and back.

Near the top, the grade steepens to a brutal 12 percent. When Kevin faltered, his doctors rode beside him, literally pushing him up the final ascent. After they succeeded, they pushed Kevin again – this time to join a broader fight against cancer and find a way to support and give back to the cancer community that saved his life.

As a result, B Strong Ride was born. The event is overseen by an advisory board made up of the family, friends and caregivers that saw Kevin through his cancer battle. Kevin and that group have carried forward the courage, emotion, determination and commitment they brought to battling cancer and use that passion to create a first class event and raise as much money as possible for Boulder Community Health Center for Integrative Care and other local cancer charities.

Founded in 2011, B Strong Ride has been an outstanding success: