When we met Dominic Scrivner, he was bald – his hair a victim of chemotherapy. Hair, however, was the least of his worries. Husband and father of 3 (plus 2 dogs!), he was 3 months into a battle with stage 3 testicular cancer and fighting for his life.

Some dates from what Dominic called, “a whirlwind life-changing experience”:

May 4: Dominic informed by his family doctor that his CT Scan indicated cancer

In June he came across B Strong Ride on the internet. Moved by the work of the event’s beneficiaries, B Strong became Dominic’s mission, both:

Nonetheless, Dominic went to work. He created a fundraising page and told his story, writing, “Hopefully, my final treatment is July 30th. This ride will without a doubt be difficult for me a mere 12 days after chemo, but I feel compelled to do what I can for the multitudes of people affected with cancer that need financial, spiritual and psychological support. The beneficiaries are the perfect organizations to supply these resources for people afflicted with cancer.”

“Scans will be completed days after B Strong to determine the necessity of surgery or further treatment. As of today, my tumor markers are within normal ranges and tumors have had significant improvement. Thank God!”

“compelled to do what I can”...again, this in the midst of fighting for his own life.

That August, Dominic completed B Strong ride. It took everything he had to make it.

From B Strong Ride Director Paul Balaguer: At the post-ride ceremony, I introduced Dominic to the crowd and told a small fraction of his story, acknowledging him as both the event’s highest personal donor as well as top fundraiser. I knew I would struggle to do this dry-eyed, and when I looked out and saw tears in Dominic’s eyes, I knew I was done for.

I did my best to express our appreciation, knowing I lacked the words to communicate how truly grateful we were for all he had done when he was battling cancer as well. Then, in a moment that still warms my heart, the crowd rose to their feet in an ovation that lasted well over a minute – their appreciation for Dominic, who, amazingly, had personally raised over $20,000.

Back to B Strong Spirit page 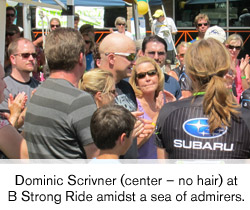